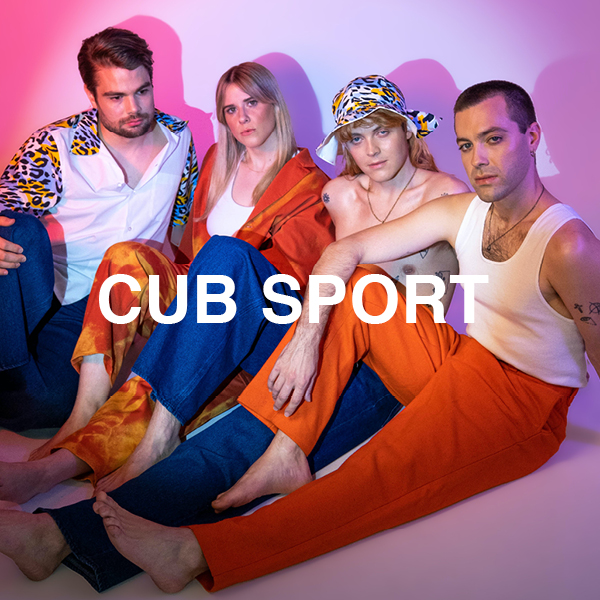 Cub Sport has undergone a transformation from local indie band to global pop powerhouse. With sell out dates across 4 continents, and a community and message that is impacting lives worldwide, the prolific independent Brisbane group are forging their own path to global acclaim.

The energy around Cub Sport is fearless and captures the uniquely vulnerable writing and vocal delivery that has seen the group reach new heights in 2020 winning praise everywhere from Billboard, i-D, RollingStone, NME, The Guardian, Nylon, PAPER Magazine, Gay Times, Attitude, The Fader and Line of Best Fit to DUMMY, Monocle, Music Week, and many more.

The band’s newly released fourth record, ( 5/5 Stars, Rolling Stone4.5/5 stars) debuted at #2 on the ARIA Album Chart, #1 on theAustralian Album Chart and #1 on the Vinyl Chart. The record embraces every side of front person and songwriter, Tim Nelson: the angelic lightness as well as the multiplicitious, haunted darkness. It recasts them and their bandmates —multi-instrumentalists Zoe Davis, Sam Netterfield, and Dan Puusaari — as fearless innovators, experimentalists willing to blow up everything about theCub Sport of old in order to create this dazzling and daring new chapter.

Catch Cub Sport in all their glory at Ability Fest 2021!